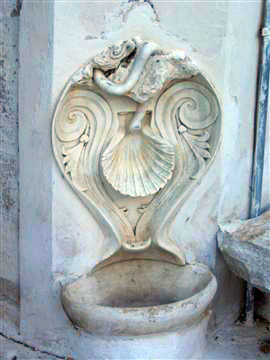 Tinos is called the “Hand-made” island or “the island of artists”. It is the birthplace of great artists whose masterpieces made Tinos famous all over the world. Wherever you go wherever you look, you will see works of art such as pigeon houses, monastery cells, cottages, mills and traditional settlements. Beautiful marble transoms decorate the doors and windows of the houses. Some of the most important artists of Tinos are Giannoulis Chalepas, Nikolaos Gyzis, Nikiforos Lytras, Dimitrios Fillipotis, Lazaros Sochos and Georgios Vitalis. We highly recommend a visit to the traditional settlements (villages) of Pyrgos, Ysteria, Kardiani, Arnados, Triandaros, Ktikados, Falatados and Volax, in order to admire our renowned art. Last but not least we suggest attending one of many concerts, exhibitions, conventions and talks that take place during  summer and are organized by the  Municipality of Tinos and Tinos Cultural Foundation.

The following museums and collections are located at the yard of the Church of Panagia Evaggelistria:

Even more museums and attractions can be found all over Tinos: